When I was shifting home two years back, I had to leave some wonderful memories behind. Spun in those memories were both people and places.

My neighbours were an old couple. Aunty was my favourite.

We had spent years talking together. A very wise, kind and a sensible lady she was. I didn’t want to part away without a token of love and appreciation to our wonderful bond that was created over time. There was only one question — what should I gift her?

I prepared a list of things that I could buy. They didn’t please me much.

Then I thought, why not gift a piece of art. I wanted to make something… some kind of painting.

One part of me strongly supported the idea while the other thought it was stupid. It opposed by saying, “What if she throws it in the dustbin.”

Amidst the chaos of packing my negative thoughts were trying to supress the positive ones. Finally the positive gathered courage and made a declaration: I don’t care even if she throws it in the dustbin. Peace prevailed. I got to work. Time was limited — just a week.

My subject was decided – a rose. I wanted it to be different, so I decided to paint it on a sheet of black sandpaper.

The end result was this 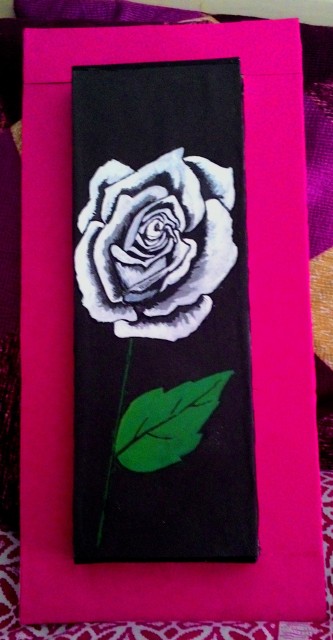 To tell the truth I was nervous about making it on the sandpaper. I had never tried that before. It was just an idea and I worked on that.

How strange it was when I had given myself to the process. The process is always a mystery as you don’t know what the result would be. Will it be good or bad? success or failure? But when you let your love and passion for something lead your path of creativity — you get something. You get — a result, failed attempt or attempts and satisfaction of some kind — in the end . The result cannot be a security or guaranteed but in the end you know you have walked a journey and taken some steps.

My art was slowly taking its form. I was skeptical but I continued and drew strength from my own lines. I had given myself into the process so there were — no questions in my mind, no ego in my heart or expectations from the universe or the process. I saw what my mind showed.

They say that the best way to gain knowledge is by sharing your own. I have always believed this and have found it to be true because when you share you become better with your own concepts. After that incident, I feel that if you want to polish your skill(s) of some kind — the best is to gift it away. Share it. Give it for free.

What’s the worst? The person might not like it or throw it in the dustbin. At least they’ll not tell you, “I threw your gift because I didn’t like it.” And if some day someone does say so then you know it would be best to give it a break, try sometime later or let it be a feedback to work on.

Anyways, coming back to my gift, I walked into aunty’s home. Very shyly I held the frame and told her, “Aunty, this is for you. I don’t know if you’ll like it or not.” I held the frame extending my hands to her. She looked at it. With a smile she said,“It’s very beautiful.”

Oozing out my creativity:
Through drawing and sketching.
Doing some embroidery work and craft.
Putting my thoughts on paper.
Trying to capture life and nature.

Sketch of an unknown face.